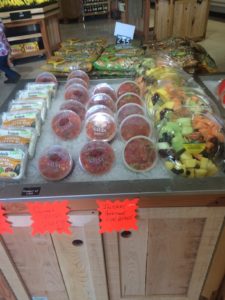 Good afternoon from Butler and Bailey Market. I hope everyone is having a good week! We have been busy this week at the store. We had a little snow scare earlier this week and now we are bearing down on the Super Bowl which always helps business.

We will have a lot of party items prepared for the weekend and your super bowl parties. The smokers have been going non-stop since Thursday so we will have smoked bologna, chicken wings, baby back ribs, pork tenderloin and pulled pork for this weekend’s festivities. We will also have our homemade guacamole and all kinds of chips and salsas. 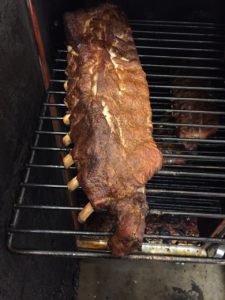 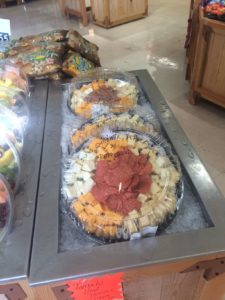 Our fried chicken continues to be a popular item and now we are also grilling chicken tenders which have been a big hit. Those items might be good for the game also. Prepared foods is the fastest growing category in the store so we keep adding more new items to the menu. 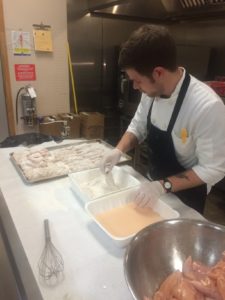 We have a lot of people here that love to cook and create and you get the benefit of that. Our folks here take a lot of pride in preparing foods that our customers enjoy and I take a lot of pride in knowing that they do. I just have to make sure we can make a little money doing it. It is a little trickier figuring out cost when you prepare meals compared to just opening a box and putting it on a shelf.

Mr. Bailey used to always say “Tom we are here to make friends and the profits will follow,” when we were starting out and trying to build the business. I think it was his way of trying to stay positive in those lean years starting out. I can tell you that that is not a full-proof theory but it has worked for the most part.

I have continued to use that antidote with the employees to this day and it still works pretty well but it does backfire on me occasionally. Sometimes we will prepare a new dish and I will run the numbers on it and figure that there is no way we can make money on it so I tell them to quit making it. They will then look at me and say “but just think of all the friends we will make!” Or if we have already sold a bunch of whatever it was, they will say “so I guess we made a lot of friends on that?” Maybe I will try to think of a new saying that is more profitable?

Well we have made a lot of good friends over the last twenty-five years and we have also managed to make a little money but we have also suffered the loss of too many friends along the way. It seems we are in a season of loss as I write this.

I can’t remember a time when so many of our customers have passed away or have suffered through the loss of a family member. I don’t know why but for some reason they always seem to come in bunches. Many of us are reeling from the loss of a good man last week. He was a dad and a husband and he was also our friend.

He wasn’t my friend in the sense that we had dinner or golfed together outside of work but I did see him in the store most every day. It turns out we both enjoyed golf and fishing so we had some things in common that we enjoyed talking to each other about on a daily basis which made him a friend in my book.

Due to he and I being similar in age and the suddenness of his death, this one hit me harder than most. May he rest in peace and may those closest to him find comfort and peace as well. He will be missed!

Well I was here at work last night and a customer (friend) stopped to talk to me. She suffered the loss of a family member around Thanksgiving and then lost another family member right before Christmas. She typically has a cheerful, bubbly personality and a bright smile to go with it. For obvious reasons, she has not been her cheerful smiling self the last couple of months when she has been in to shop. When she came over to speak to me last night I immediately noticed that bright, cheerful smile of hers. I told her I didn’t have to ask how she was doing; I could tell by her smile that things were getting better. She doesn’t know this but it really brightened my outlook after seeing her smiling face. I guess seeing her reminded me that time is a great healer and eventually we all get our “smiles” back.

Well, as you can tell, I got back to writing this morning thanks to one of those “friends” that Mr. Bailey told me we needed to work so hard to make. The more I think about his old saying the more I think he wasn’t talking about the “monetary” rewards that would follow. I think he was teaching me the real reward is in the friendships themselves, both from those still with us and from having known those that have left us sooner than we wanted.

I guess I will continue to use Mr. Bailey’s old saying with the employees. I am not sure it is going to change the profits of the store but I know its meaning will be a lot more “profitable” to me.