Good morning from Butler and Bailey Market. It looks like it may be a little cooler today. It also looks like today may be our best chance for rain in the next few days. I had a customer tell me yesterday that I needed to do a rain dance because her yard was drying up. I guess if it rains today, I will tell her it was all because I did the dance. Since I am the curious sort, I did look up rain dancing. It is a Native American tradition that is still practiced today on Indian reservations. Performing the dance requires a lot of chanting and spinning in a clockwise direction. I don’t mind chanting, but I do not do anything that requires me to spin in circles. I do not have the stomach for it. I will turn green and throw up. I don’t even like to watch other people or things that spin. I could never find any information on the success rate of the dance. Probably like everything else, when it rained people took credit and when it didn’t it was someone else’s fault. I did like looking at the special costumes the Indians wore for the ceremonial dance.

This Friday we have something new coming to our community, The Farmer’s Market. The Friday farmer’s market has always been held in the parking lot of the Church of Christ on Kingston Pike. They have now decided to move it to Lakeshore Park. Every Friday from 3 p.m. to 6 p.m., you can take the short drive to Lakeshore instead of fighting traffic on Kingston Pike during rush hour. If you have not gone to any of the farmer’s markets around town this is a great opportunity to start. I visit them quite frequently because we are always looking for new local products to sell in the store. For more information on East Tennessee Farmers Markets click here. 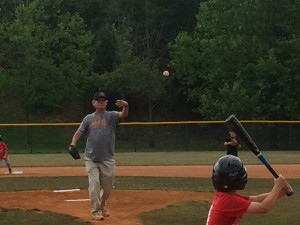 Vance on the mound

Lakeshore Park is also where my son plays sports in the Knoxville Youth Sports leagues. He actually just finished up his last game of the season in the “Vance Pitch” baseball league last night. This is a league of six and seven year olds, girls and boys, that Vance has pitched and umpired in for probably thirty years.

I really admire him for his commitment and dedication to teaching young boys and girls how to play baseball but also the life skills of teamwork and sportsmanship. There are not many people willing to get up on Saturday morning and pitch six or eight baseball games in a row to six and seven year olds plus a few games during the week. I know I wouldn’t and I have a kid playing in the league. For those of you that know him, I am sure you realize what an important mentor he is to our children. WVLT was doing a story about him at last night’s games and I understand several other news organizations have done the same. Click here for the story. He deserves all the accolades he gets. I would also like to thank the coaches my son has had as well as all the others coaching youth sports. It is a somewhat thankless job. They obviously do it for their love of working with kids because keeping all of us parents happy is impossibility. 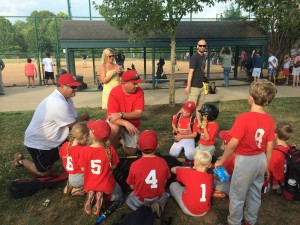 All of the new local products I have talked about recently are really starting to sell well in the store. One I was going to tell you about Monday was a new local blue cheese dressing called Better in Blue. We just got it in last weekend and sold out by Monday so I did not want to mention it until we restocked. We now have it and it is in the produce department. Another item we have been out of recently is fresh okra, but we finally got some in this morning and it looks beautiful.

I also mentioned how I prepare flank steaks in the last blog. Yesterday a customer was buying some and told me he was buying twice as much as he needed for supper because they use the leftovers for salads and other dishes throughout the week. This got me thinking…if we could convince everyone to buy twice as many groceries as they need our sales would double and our profits would soar! Well I am not a very good salesman so I guess that promotion would never work? However, if you do want to do this, we are not going to stop you. Have a great weekend!

If you received this via email click here for past blogs.