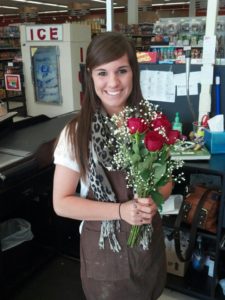 Good afternoon from Butler and Bailey Market. I hope everyone is having a good week! Business has been good this week and this weekend should be busy because Valentine’s Day is Saturday.

We have been gearing up all week for Valentine’s in all of our departments. In the produce department the big item is strawberries. They just happen to be on sale this week and next so we have been receiving them by the pallet load. Supplies and quality have been very good, which is a big relief to us on such a big week. We did have some strawberries on the vine also but they didn’t ship today and we ran out of what we had this morning. This isn’t a big item but people like them for Valentines so they can dip them in chocolate. I would rather have strawberries without the stem to dip so I can lick the chocolate off my fingers after every strawberry. I learned to do that from my kids. The produce department also has a variety of melting chocolates in case you want to dip your own….and lick your fingers. 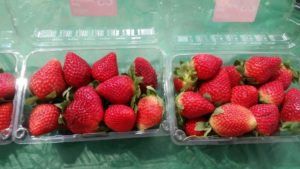 We have gotten in a nice selection of flowers for the occasion. The biggest items in that department are roses and tulips. Typically red roses are the most popular color but last year colored roses outsold the red. People’s habits change from year to year so it’s always a guessing game for us. The one thing that doesn’t change in the floral department from year to year is the price of roses. They always double in price the week of valentines. I think most people think retailers are price gouging when this happens. What happens in our situation is our cost more than doubles the week of Valentine’s. We end up having to charge twice as much but can’t make near the margins we do most every other week of the year. The same thing happens on Mother’s Day. Even though I have told you how expensive flowers are, I would still like you to come here to buy yours. 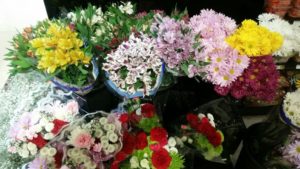 The deli/bakery department will have a lot of goodies to choose from for valentines. They have been decorating cookie cakes, cupcakes and regular cakes for the occasion. They also have a good assortment of cookies and I would bet they will come up with a few extra special desserts before the week is over. Another thing they are doing back there is dipping and decorating strawberries so you may want to save yourself some time and mess and pick up a package (they aren’t allowed to lick their fingers).

Last but not least, the meat department will have their usual assortment of great steaks and chops for Valentines. The most popular cut this week will be bacon wrapped fillet mignon. Another suggestion would be the Prime grade New York Strip. That is my favorite cut and they just happen to be on sale this week. Funny how my favorite things seem to be on sale a lot? I have already heard customers asking the guys back there to pick them out a special steak and they will be glad to do that for you. Ashley also told me he is cooking some whole beef tenderloins using our favorite recipe. He will have it for sale sliced and ready to go or if you want a whole one, give him a call to order one. To complement your steak or chop you may want to pick up some Lobster tails. They are on sale this week also. Erica and I have not had a steak in six weeks so I may just fix that for us Saturday. I will get the strip and she will want the fillet. I guess you can cheat on a diet for Valentine’s. 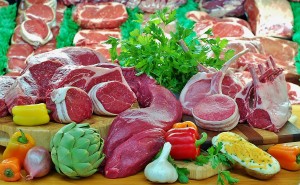 Well today broke a big streak at our house. Tyson, my eight year old, missed his first day of school ever. He has been in some kind of school since he was probably two or three years old and had never missed a day up until now. The stomach bug finally took him down.

Erica called me yesterday to tell me he had thrown up but was feeling better. By the time I got home he was throwing up on about every fourth breath. I think it was almost as painful for us to watch the little fellow going through that as at was for him. He obviously is never sick so we all were out of sorts. Erica stayed with him in his room last night and told me it continued for most of the night. I felt a little bad about going to bed and leaving her to stay up with Tyson but not bad enough not to do it. At the end of the day, even though Tyson wants to spend every waking minute with me, when he or Lauren is sick they want their mommy to be with them. Dad’s good for some things but when they don’t feel good mom is the only one that can help them. I get that because I was the same way, maybe still am. There is something about mommas and their babies that a dad will never understand.

I was in charge of taking Lauren to school this morning and I came on to work. I will have to leave early to go get her and maybe we will just come back to the store and she can help me with the flowers. I bet Erica has gone into decontamination mode at home.

I would say by the time I get home, the carpets and draperies will be steam cleaned, all of the linens and clothes in the house will be washed, and most of the furniture will be reupholstered. There will also probably be a strong bleach odor and maybe even some yellow caution tape around the areas Tyson has been.

Part two of a mother with a sick child is preventing anyone else in the household from getting sick, mainly the other child. I am sure five seconds after Tyson threw up the first time; Erica started developing a plan for keeping the rest of us healthy. Moms think that way, dads think of where they can go in the house to get away from the chaos.

I also imagine she will have some rules for Lauren and I when we get home like don’t breathe when you are in the same room with Tyson, no going barefoot, and all food and drink must be boiled before consumed. And I am sure that if Lauren and I decide to dip strawberries in chocolate, we won’t be allowed to lick our fingers.

Have a great Valentines and stay healthy!