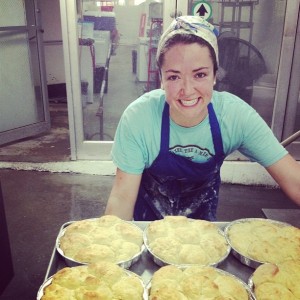 Good afternoon from Butler and Bailey Market. I hope everyone had a good weekend. We had a busy weekend here at the store. Friday and Saturday are always busy days but most people are surprised when I tell them that Sunday is a busy day. Sunday is usually the second busiest day of the week for us, just behind Saturday.

We have been open on Sunday’s since we started here twenty-five years ago. Back then Sunday business was not that good so we were open just a few hours. I think it was from twelve until six. Now we are open from ten until nine which is about like the other six days. We just start two hours later in the morning.

I am not sure why Sunday has become such a big day, but I think it may be because more and more households have two people with careers instead of one. This really limits the time families have during the week to shop and if you have children, Saturdays and weeknights fill up quickly with their activities. This leaves Sunday to get ready for the week ahead. I am sure there are other factors involved, but I think the changing work force plays the biggest part. Regardless of the reasons, we will continue adapting to accommodate the changing habits of our customers.

This afternoon and tomorrow, we are going to be changing our produce department. I ordered some new fixtures for the department that have finally arrived. My hope is they will help us merchandise the produce better as well as make it easier for you to shop in the department. I am always hesitant to change things around the store. Changes are always expensive and I never know for sure if we are going to get the results we are looking for until after the fact. Most of the time I think we get it right, but I have had my share of expensive blunders. One thing I do know for sure is if you do nothing you will eventually go out of business. I have seen that too many times with independently owned grocery stores. Time will tell about this decision but I am already working on the next one. Hopefully, I will not have to look back. 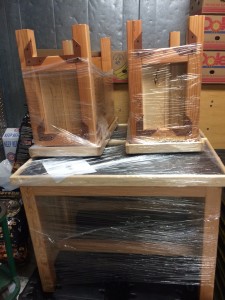 I did do a little cooking over the weekend. Actually I did a lot of cooking. We had a cookout at our house Saturday night for nineteen people. As usual, I was in charge of the meat and the other folks brought sides and desserts. Since I didn’t know what everyone liked I cooked chicken, pork, and beef. In hindsight, I should have had the store do it but since I was off Saturday, I figured I could handle it.

I wanted to slow cook everything on my grill but short of buying three more grills, that wasn’t going to happen, so I adapted. My biggest concern was the baby back ribs so I did them a different way which was a lot easier and still turned out great.

All I did was salt and pepper them and then brushed a little BBQ sauce on them. I then wrapped them tightly in foil, put them on a pan and stuck them in the oven at 215 degrees. I left them in for four to five hours while I was doing everything else on the grill. When the company showed up, I took them out of the oven, unwrapped them and brushed BBQ sauce on both sides of the racks. At this point they are fully cooked, but I wanted to put them on the grill so they would have the smoked flavor. I put the racks, unwrapped, on the grill on low heat and kept turning them until the sauce started to char a little on both sides. This probably took ten to fifteen minutes, and they were ready to serve. 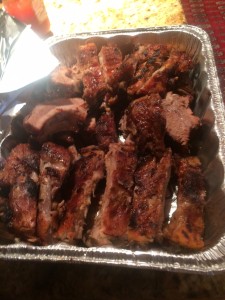 I think they turned out juicier and more tender doing them this way instead of strictly on the grill so you may want to try them this way.

Something else I tried for the party was making biscuits. I have never tried to make biscuits, probably because my mother has always said she couldn’t make good biscuits. She is a good cook so I have always figured if she can’t cook something there is no reason for me to try.

Well in this month’s Food & Wine magazine our friends at Cruze Farm Dairy are featured and Colleen Cruze showed her biscuit recipe. They looked and sounded good in the magazine so I wanted to try to make them. Something didn’t go just right because I ended up making a big pile of goo. I kept trying to add flour to help roll the dough out but knew that wasn’t going to work. I ended up just using my hands, grabbing a wad of the goo and putting it in the pan. Surprisingly, they turned out great, especially when we add Carnathan’s local honey on them. I just left the mess on the counter while we ate which was probably a mistake. Later, after everyone left, I saw Erica over there trying to chisel the dried up goo off the countertops. Luckily I own a paint scraper.

I am going to try them again when I don’t have so many to feed and if you would like to try them, here is the recipe. 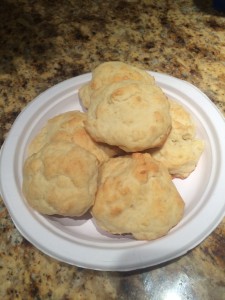 I would also try to pick up this month’s Food & Wine magazine. There are a lot of great farm to table recipes in there. 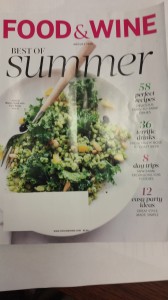