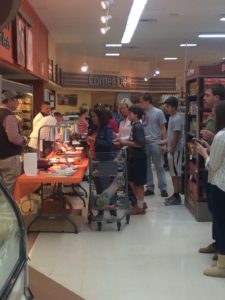 Good afternoon from Butler & Bailey Market. I hope everyone is having a good week. It looks like we are going to have to get out rain coats this afternoon and then we are going have to dig out our winter coats once the rain moves through.

We had a great event with Allan Benton and Joseph Lenn this past Saturday. I appreciate all of you that came by to meet them and am sure they do too. They cooked up some great food and told some great stories along the way. Joseph and I have gotten to spend a lot of time together over the last two years, but I rarely get to visit with Allan, so that was a real treat for me.

We are now doing a quick turnaround because we are having an even bigger event this Saturday. It is our annual Holiday Open House. I think of it more as a Customer Appreciation Day. We only advertise this event inside the store and on this blog because first and foremost, it is designed for all of you that support us throughout the year. Everyone one is welcome of course and we will see a lot of new faces which is great but my main goal is to show my thanks to the ones that “brought us to the dance”.

Here is a quick rundown of what we will be sampling, but I am sure it will continue to change right up to Saturday morning so forgive me if I miss a few. 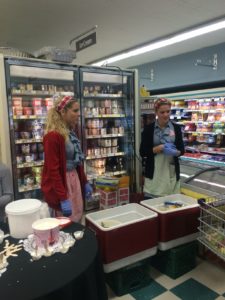 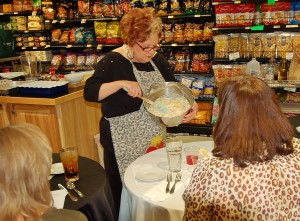 Southern Natural Foods will be here sampling some of their beef and pork products. These are all local products produced by local folks, and we love showing off local products! 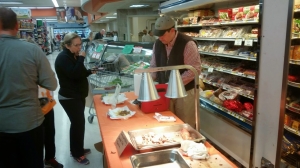 We will also be preparing, in the store, beef tenderloin, standing rib roast, pork tenderloin, Mamie’s cheese wafers, two types of cornbread dressing as well as  multiple other side dishes, pumpkin and pecan pie and all the things I have forgotten plus whatever else we come up with between now and Saturday.

This event has become a holiday tradition for my family and I hope, if it hasn’t already, it will become one for your family as well. The event will be from 11 a.m. to 2 p.m. so I will see you then.

I am trying to get this written early today because I have a meeting at one with Tyson’s school principal due to a little discipline problem he had last week at school. I figured if I wrote this after my meeting and the meeting didn’t go well I might express that in the blog, jeopardizing Tyson’s school career or my marriage or both. I’m bad about saying what is on my mind.

I think Tyson must have spent one week too long letting his broken arm heal up. No doubt he has had a lot of pent up energy plus a little frustration having to be idle for a few weeks, and I guess he took it out on one of his schoolmates. From what I understand this has been building all year between him and the other student. All that really happened was they got in an argument which really upset Tyson. After their argument, he went and told one of his friends how he really felt about the other student. He would have been fine doing that had he not used one “choice” word in his description of the other student, mistake number one. He actually didn’t even say the word but used the first letter of the word making it pretty clear what he meant even though he doesn’t even know what the word means.

The principal then wanted to know how he knew that word and where he had heard it. This is when he made his last and biggest mistake. He told the principal he wasn’t sure but probably from his mom. If he learns nothing else from this incident, he needs to know you should never throw your mother under the bus when you are sitting in a principal’s office awaiting discipline. Personally, I thought it was funny and thought it was much better for him to blame her instead of me.

I am not proud of the fact that Tyson called that little girl the first letter of a bad word so we are working on how to handle situations like that a little more appropriately. I may be the blame for that. I tend to call things like I see them even when I shouldn’t. I am proud of the fact that he told the truth. He is a “literal” kid and probably because of that and of course good parenting, he has always told the truth and most of the time it is on himself. I guess at some point he will figure out that the world is full of people that don’t tell the truth. I guess he will also learn that society doesn’t like literal truth, they like “politically correct” truth.

Wouldn’t it be nice if we could all go back to being eight year olds or at least act like eight year olds. Then we would always tell the truth and we would also believe what everyone else was telling us and we could settle all of our disputes on the school playground.

I imagine Tyson will always be a literal thinking person, calling them like he sees them and I hope he always tells the truth. My advice to him would be make sure he is nice to his uncle John because he will probably need a lawyer in the future and if the school principal ask you to write down the “B word” write down Butler & Bailey Market and tell her it is a great place to shop. Have a great week and I will see you Saturday!