Good afternoon from Butler & Bailey Market. I hope everyone is doing well. I was hoping to be bragging about going without rain for three straight days, but Mother Nature snuck another shower in on us yesterday. It looks like we are dry today and tomorrow and then more rain Thursday. One of these days the rain will stop, it will get hot and the mosquitoes and weeds will take over the world so I should be careful for what I wish for.

We started a new ad this week in the store. My favorite things in this ad are Cowboy Ribeye steaks and Argentine Red Shrimp.

The Cowboy Ribeye, which is basically a bone-in ribeye, is probably the heartiest cut of beef we have. You will not get up from the table hungry after eating one of these. I usually just lightly season them with salt and pepper, throw them on a hot grill, burn both sides and I’m done. I eat mine rare so if you like it more done you should probably back off the heat a little and cook it longer. It is a very flavorful, tender cut of meat so you should give one a try if you haven’t. 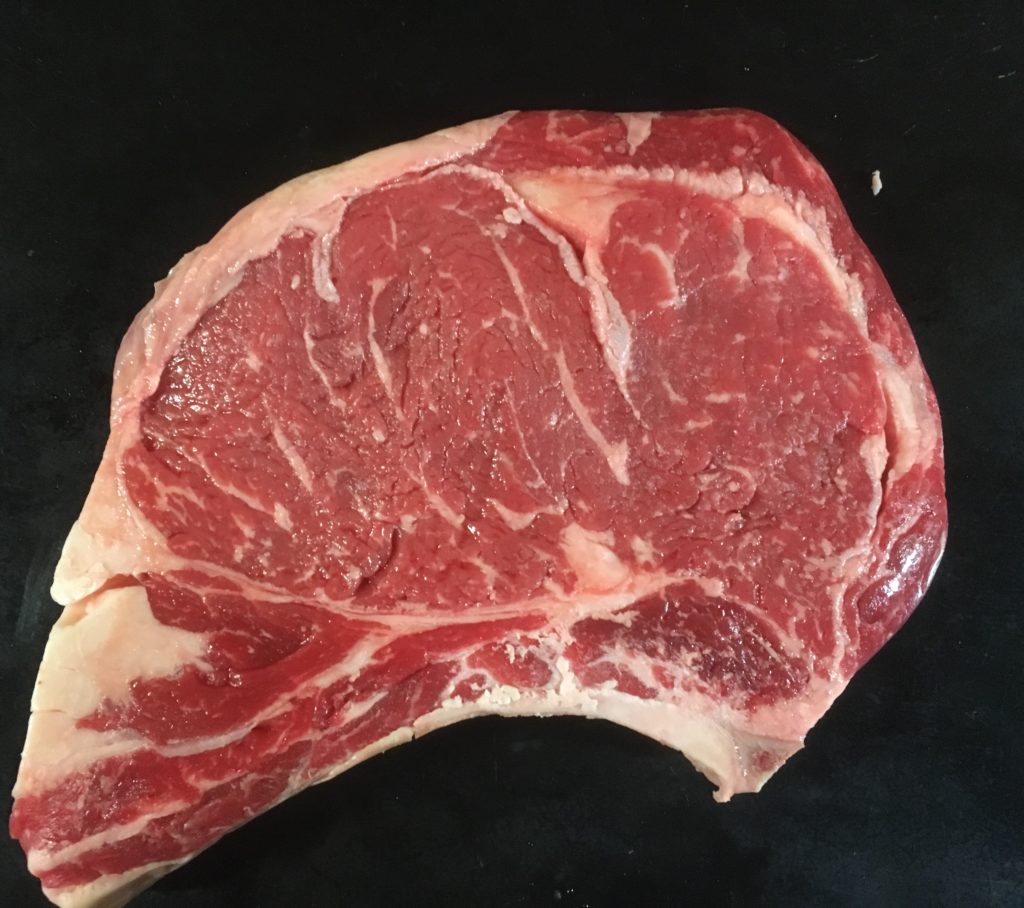 The Argentine Red Shrimp come frozen in a bag. You can get them shell-on or peeled and deveined. I usually get the peeled and deveined. We usually keep some in our freezer at home and just take out what we need for our meal. My favorite way to prepare them is on the grill.  I put them on wood skewers and then melt butter mixed with some olive oil and garlic powder. I brush the shrimp with the butter mixture and set them aside while the rest of the meal is being prepared. The shrimp cook quickly so you can pretty much have everything else ready and on the table before you start cooking them. I usually give them about two or three minutes on each side on a medium grill and they are ready. If you cook them just right they melt in your mouth.

Last week I wrote about cooking Cheshire pork chops which we carry in the store. Ironically or coincidentally, a day after that blog came out I got a call from a magazine publisher. They are apparently doing a “Top Chef “ issue and wanted to know if I would like to advertise in that issue since the chefs will be using Cheshire pork along with several other local and regional brands that we sell in the store. I told them to email me the information and I would consider it. After looking over their proposal, I came up with two to four thousand reasons not to place an ad in their magazine. Along with Cheshire pork, they are also using Benton’s bacon and ham, Springer Mountain chicken, Sweetwater Valley cheeses and some super foods like quinoa and chia seeds. We carry all these things at the store as well as many other local and regional items. I know “The Grocery Life” blog does not have the same glamour or coverage as an ad in a slick magazine but it fits my budget a little better. Maybe if you read this, you could pass the word along that we carry these things and “top chefs” use them?  Plus, I can save the money for stuff like rent, payroll, insurance, taxes and my most expensive personal vice, fishing!

Speaking of fishing, the Bass Master Classic is being held in Knoxville this weekend. This is like the Super Bowl of bass fishing. Fifty of the top bass fishermen in the world will compete in the three-day tournament to decide who is number one and the winner will take home a nice trophy and three hundred thousand dollars. It is also projected to pump more than Twenty-Five Million dollars into the local economy!

You will probably see several fancy trucks and boats rolling around town this week wrapped with all kinds of advertisements to promote their various sponsors and if you are in sight of Fort Loudon Lake, you will see hundreds of boats following the pros around watching them fish. Several fishermen from East Tennessee made it into the tournament this year so I guess I will pull for one of them to win.

Probably my favorite professional bass fisherman is Brandon Coulter. He missed making it into the Classic this year but he fished in it last year. Why is he my favorite? Because he lives right down the street in Forest Brook and he and his family shop in the store, and I’m all about supporting “local”. You might have even seen his truck and boat parked out in front of the store. It would be the one with the fancy company logos all over it. Most of you probably don’t care a whole lot about fishing but I think it is really cool to have one of the best fishermen in the world living in the neighborhood.

Maybe one of these days I will splurge and buy an ad in a fancy magazine. I guess it might even end up making me rich and famous? I guess right now I will just depend on this blog and word of mouth to promote our business. On second thought…. maybe I could buy an ad on Brandon’s boat… (I’m sure I could fit that into my budget). I think the Butler & Bailey Market logo would look great on the side of his boat as he travels all over the country fishing. It may not sell a lot of groceries but it might get me a few fishing trips with him. To me, that would be a lot more rewarding than any fame and fortune a magazine ad would bring!

I hope everyone has a great week and thanks for letting us be a part of your community!