Good afternoon from Butler and Bailey Market. I hope everyone had a great Fourth of July weekend. I don’t know if there has ever been a more beautiful day of weather on the Fourth as we had this year. I can’t remember one. Saturday and Sunday weren’t bad either.

I worked on the Fourth but was off on Saturday and Sunday. Saturday we had some friends out for a cookout. I finally got to try the beef brisket recipe a customer told me about. The only problem was they told me a couple of weeks ago so I couldn’t remember every detail. I really need to start writing things down. Here’s how I did it.

I wanted to get a small one but the guys in the meat department told me to get one that was thick. It is a pretty flat piece of meat so they said it would turn out better if it is thick. After choosing one, I injected it with beef consommé. I think the recipe called for some kind of beef base and since I was busy Friday, I just grabbed a can of Campbell’s beef consommé off the shelf to use. To inject it you need a syringe. We sell them, but I used the one we have in the meat department. I just poked it all over and shot the consommé into it. Once I had done this, I put a dry rub on the outside of it. This was one part kosher salt, one part sugar in the raw, and one part butt rub. I coated the brisket completely but not caked on. This was all done Friday the day before I cooked it.

Saturday morning I started cooking. I used a green egg and indirect heat, but I guess it will work in an oven or another type of grill as long as you can block direct heat. The green egg kind of works like a smoker so you get that smoke flavor. I set my temperature at 200 degrees and kept it there for the whole time. I laid the brisket on the grill fat side up and cooked it for three hours. I also put some water in an aluminum pie pan and put this on the grill to keep some moisture in there. At this point the internal temperature was about 155 degrees. I then wrapped it in aluminum foil and while doing so added about a cup of allegro meat marinade. I then continued to cook it at 200 degrees for five hours. About this time our company showed up so I took it off the grill and put it in a cooler, leaving it wrapped, for about two hours. I didn’t check the temperature when I pulled it off the grill but could tell when I removed it that it was ready. It was very soft instead of firm. Putting it in a cooler allows it to steam in its own juices and really tenderizes it. I always do this at least an hour for large pieces of meat like a brisket, Boston butt, and even a standing rib roast. The guys at Copper Cellar taught me this. (Note: There is not any ice in the cooler, just an empty cooler.)

When we were ready to eat, I just pulled it out of the cooler, unwrapped it, and sliced it. It stays hot in the cooler so you should not have to reheat it. You want to slice it across the grain between an eighth and a quarter of an inch thick. I had three kinds of sauces to serve with it but most preferred it without sauce which means I must have finally cooked a good beef brisket. Yea!!!

We had a great time with our friends that afternoon and evening and after everyone left it was shower time for the kids so we could get them in bed. When Lauren came to tell us goodnight, she said she didn’t feel well. Turns out she had a 102° temperature. I think she had felt bad all day but we were so busy getting ready for a party and having a party I don’t think we really noticed. Another great parenting job by Tom and Erica. We gave her some Motrin and put her to bed and she slept through the night.

Sunday morning her fever had gone down to 99.5° where it stayed most of the day. We typically go to church on Sunday mornings but obviously she was not going to be able to go. Usually I would still go and take Tyson and Erica would stay home with Lauren. Well Tyson wanted to go skateboarding instead of church and since I was on a pretty good run of bad parenting, we decided to go to the skateboard park instead. We did talk about church on the way to the skateboard park which is how I justified my bad parenting. 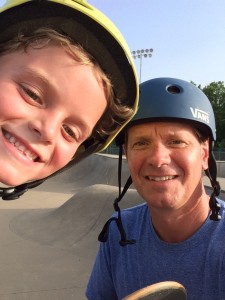 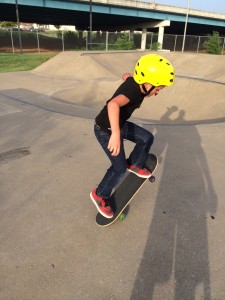 On the way home, we always have to stop at the Pilot on Alcoa Highway to get an icee. This has become part of the father/son skateboard park tradition. The last three times we have stopped, the icee machine has been broken, which is a heartbreaker for Tyson. If anyone has Mr. Haslam’s phone number, could you call him and tell him it would be a big help to me if he could get the machine fixed. 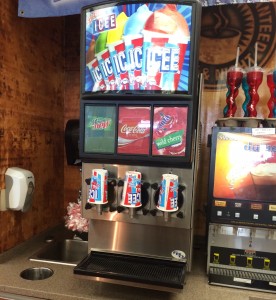 It’s back to work this morning. I have eaten so much food over the weekend I don’t really feel like writing about food this morning. We will probably be eating a lot of salads this week until we recover. Hopefully I will be ready to talk about food the next time.