Good afternoon from Butler and Bailey Market. I hope everyone got through the storms alright last night. It was a little scary here as well as at the house.

Keith was in charge at the store last night. It is always a tense situation at the store when storms are coming through. We always try to keep the store open but we also have to consider the safety of the employees and customers. Thankfully the power stayed on here throughout the storms which makes it a little easier but they still ended up taking cover back in our storage area during the worst part of the storm. Once the storm passed, it was back to business. They did close a little early to get home before the next wave came through.

I was at home last night. Our friends, Joseph and Kathryn, came over for dinner and Erica and I were really looking forward to spending some time with them as well as eating a great meal. 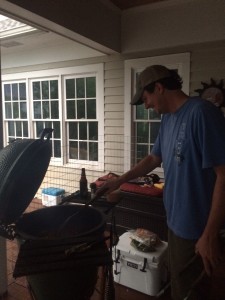 Joseph is a pretty good cook. Erica and I were in charge of the flank steak and rice and Joseph was going to do everything else. I was going to document how everything was prepared so I could put it in the blog but about ten minutes after we started cooking the power went out. The rest of the meal was prepared by lantern and flashlight under tornado warnings so my plan to get Joseph’s recipes as well as how to prepare them will have to wait. 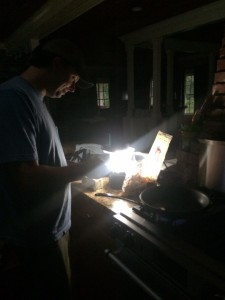 To be honest, I am not really sure what all we ate since it was so dark. I do know we had mushrooms he had found in the woods up at Blackberry as well as a lot of other vegetables from the gardens up there. 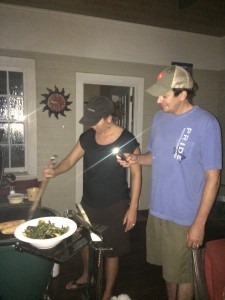 I think we finally sat down to eat about nine-thirty or ten when the storms had calmed down. It was a delicious meal so I will have to find out what we ate. After dinner we sat around telling grocery store stories from the days when Joseph worked here so they didn’t leave until about midnight. Well they were gone about five minutes before they were back. Trees were down across the road out of our neighborhood so they couldn’t get out. Kathryn needed to be at work early the next morning so Joseph and I loaded up the chainsaw and headed out to clear a path with another storm cell bearing down on us. We managed to cut away enough to fit a car through and headed back to the house. They loaded up and left again hoping to beat the next storm home. Erica and I went to bed and waited to hear that they made it okay. They did and then the next storm hit.

It was a fun but scary night but I told Erica if it had been our last meal at least it was prepared by the chef at Blackberry Farm. 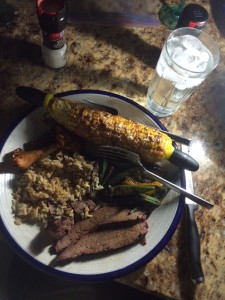 Our power was still out when I came to work this morning but I am thankful that’s all that happened at our house. I am sure others were not as fortunate.

I hope everyone has a great week it looks like the weather is going to be a lot better.