Good afternoon from Butler and Bailey Market. I can’t believe it is Monday already. I hope everyone had a good weekend. We had a good weekend here at the store. I think a lot of people are back from vacation which helped business this weekend. Another thing that helped business was our one day beef tenderloin sale on Friday. I wanted to try a promotion through this blog to see how it would work. Apparently news travels fast because we sold a lot of beef tenderloin. A few people were disappointed because they couldn’t make it to the store on Friday. Hopefully, they will be able to make it the next time we try something like this.

I mentioned the upcoming Rocky Hill Christmas Parade in the last blog. Everyone seems to be really excited about the parade. More and more businesses are signing up to be a part of the parade which will just make it that much better. I will forewarn you that Northshore Dr. will be closed along the parade route during the parade. I am kind of curious to see how that is going to work on a Saturday night at 6 p.m.

Tonight Ashley, our meat manager, is going to a BBQ event put on by the American Culinary Federation. They asked Ashley if he could come and demonstrate how to break-down a whole hog. Southern Natural Foods, who we buy our local pork and beef from, is providing a two hundred pound hog for the event so Ashley will have his hands full. Culinary students from U.T. as well as other schools will be there to learn the lost art of breaking down whole animals into certain cuts of meat. Ashley has become an expert on this with both beef and pork so he gets a lot of requests for events like this. I am certainly lucky to have such experienced butchers like Ashley working here. They do a great job! 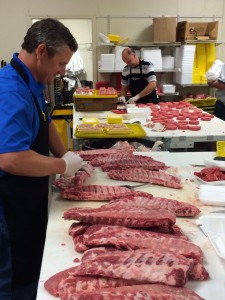 Ashley getting ready to smoke some baby back ribs!

If you would like to try some of our local pork from Southern Natural Foods, we have bone-in pork chops from them on sale this week. Everyone that has tried our local pork has really enjoyed it. To me, it has more flavor and better texture than our standard pork.

Another thing you may want to try is our New York strip steaks. They are on sale this week also.Eddie, one of our biggest meat customers, called me this morning to tell me the four he bought this weekend were probably the best he had ever had. Coming from him that is a pretty good compliment.

We finally have Evian water back in stock. The supplier we have always gotten it from quit handling it so we have been out of stock for quite a while. Our new suppliers finally delivered this morning so we are back in business. We also have just gotten in a new local honey. It is produced be Doug Carnathan right here in Knoxville. I took a jar home this weekend and my wife told me this morning that if I put it in the blog, tell everyone it is really good. 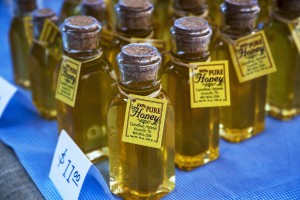 We have two cooking classes this week and both of them are full. We do have some openings for the July 24th and July 29th classes. Keith just told me he will have the August cooking class schedule out by the end of the week so be looking for that in the next few days.

I am going to be out of town for the next few days so if there is no blog for a few days that is why.

Have a great day!